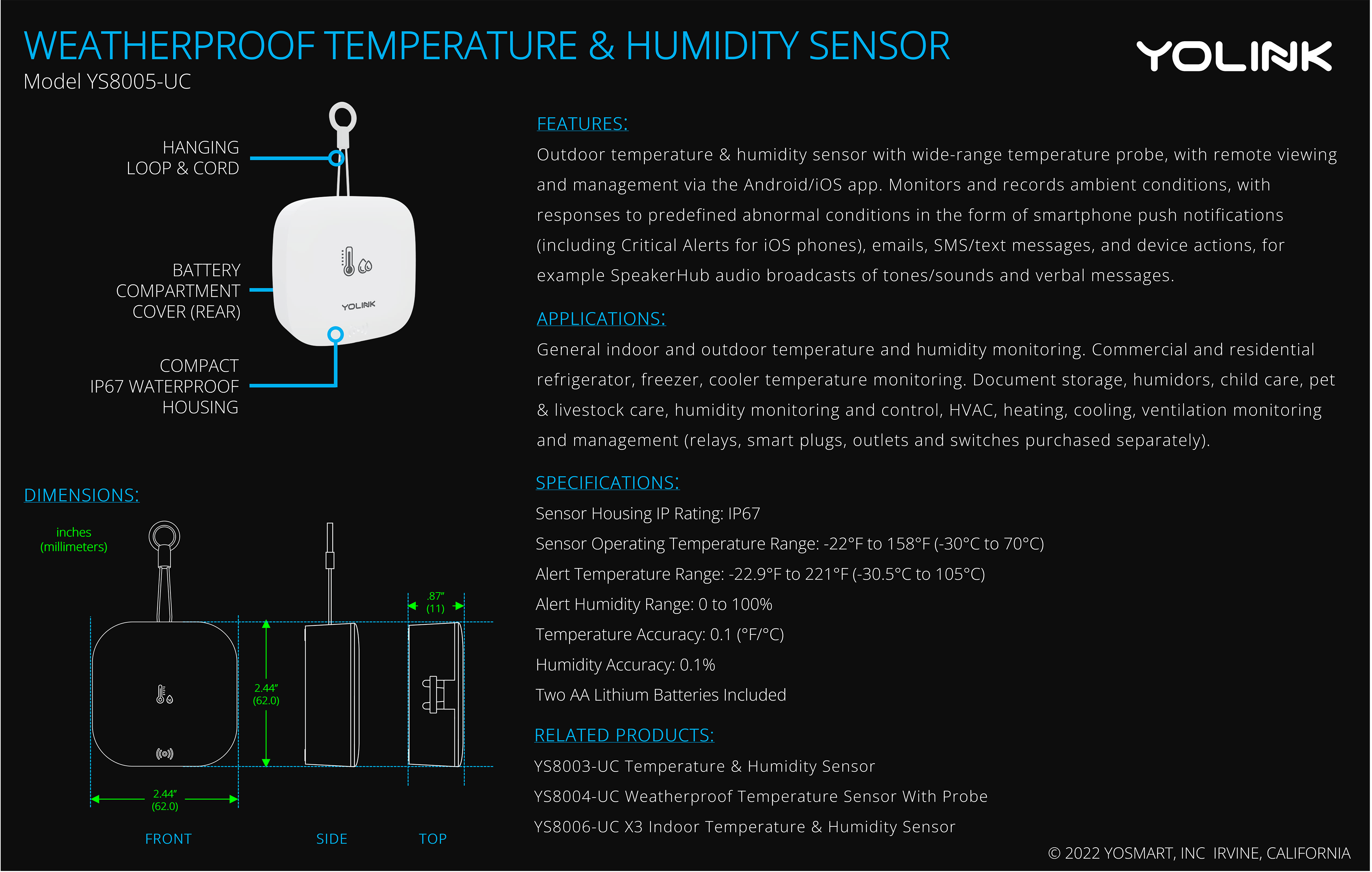 Smart Home is What You Make It!

REQUIREMENTS:
REQUIRED PRODUCTS (HUB):
For full functionality, including for the app to work, YoLink devices must connect to at least one hub (YoLink Hub or SpeakerHub), and that hub must have an internet connection. Unless you are adding devices to an existing YoLink account, or unless your building is covered by an existing YoLink wireless network, please add one hub to your order.
WHAT'S IN THE BOX?
(1) YoLink Outdoor Temperature & Humidity Sensor (lithium batteries included)
(1) Quick Start Guide
RELATED OR SIMILAR PRODUCTS:
FAQ / FREQUENTLY-ASKED QUESTIONS:

Q: How often does the sensor check the temp for automation? Is the sensor only checked after a certain number of minutes?

A: The sensor updates the app each hour, minimum, but also updates if any of the following occur:

At least 0.9 F degree change over a period longer than 1 minute

Or the SET button on the device has been pressed.

Q: Is there an Alexa command that will read out the temperature?

Q: I see the YoLink hub is required for all smart features. Is there an alternate way to just connect wifi and monitor from ios without the hub?

A: No, YoLink hub is required. YoLink smart devices use a special wireless technology based on LoRa, which can offer extreme long range (1000 feet compared to 100 for WiFi, outdoors, line-of-sight) and superior obstruction penetration including concrete and metal, but they do not use your WiFi. They need to wirelessly connect to one of our hubs.

COLLECTION MEMBERSHIP:
This product is a member of the following collections:

" Great solution to monitor the temperature of my swimming pool!"

I wanted some way to check my swimming pool temperature easily, without going into the burning Vegas sun during the day, and this is it! I have had the Yolink water leak sensors for a few months now and was super impressed with them, in particular the long battery life and very long range. I knew that any Bluetooth or WiFi device would probably be unreliable with the extra distance from pool to the house, not to mention the pool being at ground level. So I had been waiting for Yolink to release this device, I'd seen it coming soon on there website. I knew that the Yolink LoRa technology would work well for this outdoor device and sure enough it does. One thing I've noticed is that it appears to only take a reading once an hour. Swimming pools take a long time to heat or cool so for my application at least, it's not really an issue. But maybe that's something they'll make configurable in the future with a software update. I also like that it charts temperatures over time so you can see the history. You can even download all the readings as a csv file. Data nerds rejoice!

"Great heat sensor with the ability to interact with other devices!"

I purchased this heat sensor for my generator enclosure. I have heard horror stories about people's (including my neighbor generator) generators over heating and stop working due to the cooling/exhaust fan stopping working. The enclosure just requires a single cooling/exhaust fan. I had two installed. They both do not run at the same time. One is for a backup. Using this sensor, it monitors the temperature in the enclosure. If it start over heating (user adjustable). I get notified a high temperature warning for my generator enclosure on my phone. At the same time, the second/backup fan is automatically turn on. So I do not need to do anything. Please note that go be notified and for any type of automation, the Yolink hub is required.

The pros of Yolink and their devices. 1) Easy setup, using the app, scan the QR code on the device and it is added. You can change the name of the device if needed (highly recommend) 2) The great customer service. Regardless if it is a question, issue (have not had any so far) or even a suggestion, a REAL, living/breathing person will respond to you. 3) The large variety of devices and sensors they offer. 4) The ability of the devices and sensors to interact with each other via the hub and with Alexa and the devices linked to Alexa, again via the Yolink hub.

As far as any Cons: I have not found any yet

I purchased this to throw in my chest freezer in my basement to warn me if I had a failure. Super easy to add to my YoLink hub. Easy to set alarm limits. I can't testify to its absolute accuracy... it says my freezer is below freezing, and all my food is still frozen, so its good enough for me. The pre-installed battery did drop to half power within 3 days of activating, so I was concerned that it might chew up batteries, but it seems to have leveled off, and hasn't moved in a month. So far, I've been impressed with this unit, as well as the security sensors I have on my door and windows. I'll be adding at least one more of these, along with a smart plug to turn a space heater on and off in my camper soon!

EDIT: I've since purchased a second freezer, and a second YoLink sensor to put inside. The battery level dropped within a day to half, just like the first one. The battery level on my first sensor hasn't moved since January, so I'm assuming its just because the batteries are frozen that they appear to be half charged. I can't say enough about the YoLink products (temp sensors, and door/window sensors) I've purchased so far! I'll be adding more in the future.